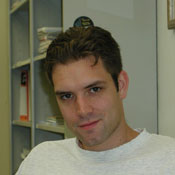 Kevin Strecker, who earned his Ph.D. from the Rice University Department of Physics and Astronomy in 2004, died suddenly and unexpectedly on November 4, 2012.

Kevin’s thesis research, performed in the group of Prof. Randy Hulet, was entitled “Tunable Interaction in Quantum Degenerate Lithium”. Kevin pioneered the Feshbach resonance in lithium to create novel states of matter including matter wave solitons of attractively interacting Bose-Einstein condensates and strongly interacting Fermi gases. Kevin’s thesis research was published in Nature, Science, and in multiple papers in the Physical Review Letters. Kevin was the 2004 recipient of the H. E. Wilson Award given by the Department each year to the graduating doctoral student with the most outstanding Ph.D. thesis.

Following Rice, Kevin joined Sandia National Laboratories in Livermore, CA, where he worked on collisions of cold molecules and on nuclear non-proliferation. The move allowed Kevin and his wife Michelle to join family already living in California. They purchased a house in Oakland requiring restoration, a project that brought Kevin and Michelle much joy.

Those who knew Kevin at Rice remember him as masterful experimentalist, with incredible energy and enthusiasm. At 6’5”, Kevin was an imposing physical presence, but he was a wonderfully kind, gentle, and humorous man. He will be greatly missed by all those fortunate to have known him.

In memory of Kevin, the Kevin E. Strecker Award has been established in the Department of Physics and Astronomy to recognize the most outstanding Master’s thesis each year. It is intended to provide encouragement and recognition to an outstanding student who is near the midpoint of their Ph.D. studies.

The goal of endowing the Kevin Strecker Award with $25,000 has been set, and thanks to a very generous gift from Kevin’s wife, Michelle, over 80% of that goal has already been met. Michelle noted that the money that Kevin received for the Wilson Award was greatly appreciated at that time in their lives, and she welcomes the opportunity to return the favor, and at the same time, to honor Kevin’s memory. Contributions to the Strecker Award Fund will go toward a permanent endowment, and with the award being funded solely by earnings on the endowment, the Strecker Award will be awarded annually in perpetuity.

There are two ways to contribute to the Kevin E. Strecker Award Fund:

1. By check - Please make checks payable to Rice University and put the Kevin E. Strecker Award Fund in the memo. Checks can be mailed in care of:

2. Online - go to the giving.rice.edu <http://giving.rice.edu> website and put the Kevin E. Strecker Award Fund in the special instructions section.